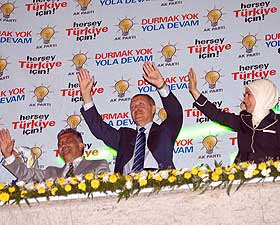 Ένα μικρό σχόλιο του Johan Norberg στο προσωπικό του GlobLog αποτυπώνει με τον καλύτερο δυνατό τρόπο τις εκπληκτικές εξελίξεις στην Τουρκία του Recep Tayyip Erdogan, ενός ηγέτη της εμβέλειας του Κεμάλ Ατατούρκ.
Tuesday, 8/5/2007:
02:04 - ISLAMIC CALVINISTS:
[Many Europeans, including the new French president, don’t think that Muslim Turkey belongs to modern, liberal Europe, and the Turkish opposition and military has just stopped Abdullah Gül from becoming Turkey’s president, because of his Islamist background.
But is Islam incompatible with modernisation? Take a look at this fascinating ESI report about Gull’s home province Kayseri, in Central Anatolia, the rural, traditional, religious part of Turkey. In just a few years, structural reforms and impressive growth has transformed it into a wealthy center for manufacturing and trade. Kayseri has become a leading cluster for Turkish furniture production and here one fabric company produces one percent of the world’s denim.
Even more interesting is that this economic modernisation has led to the development of a new culture that promotes individualism, entrepreneurship and hard work. Some talk about a "Quiet Islamic Reformation" and Abdullah Gül has said that this is where we see Islam’s version of Calvinism developing.
We don’t know where this interesting development will end. But we know that Europe doesn’t encourage it by saying thanks, but no thanks.]